Pecans begin their story in North America as natives and have a history tracing back to the 16th century. The pecan's history shows it is by far one of the most valuable North American nut species. In the United States, pecans rank second in popularity only to peanuts (which are not even tree nuts). Pecan trees can grow to over 100 feet tall and live to be over a thousand years old. 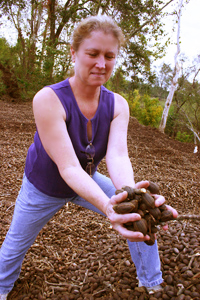 A member of the hickory family and closely related to the walnut, the pecan's original botanical name was Hicoria pecan but was changed to Carya illinoinensis in the late seventeenth century. Fur traders brought the pecan to the Atlantic coast from Illinois, calling them "Illinois nuts", hence the latin classification of illinoinensis. The term pecan comes from the Algonquin Indian word "pacane", meaning a nut that needs to be cracked with a stone. The Algonquins were a North American tribe located on the Ottawa and St. Lawrence Rivers. Pecans were the main food staple for these Native Americans in the south central region of the United States.

Two United States presidents knew about and promoted pecans. Following a trip to the Mississippi Valley in 1775, Thomas Jefferson returned to Virginia with some nuts and seedlings that he excitedly shared with George Washington. Both men planted and grew the resulting trees on their properties. Right after the Civil War, Union soldiers helped increase the pecan's popularity by bringing pecans home when they returned north from the war. The first successful effort of record to graft pecan trees happened around 1846. A slave gardener on Oak Alley Plantation in southern Louisiana, remembered only by his first name of "Antoine", succeeded in grafting sixteen trees near the plantation mansion. Antoine's resulting cultivar was named "Centennial" in 1876 to commemorate the 100th anniversary of the United States. Since that time, more than five hundred other pecan cultivars have been named. Many are named for Native American Indian tribes including Cheyenne, Kiowa, Sioux, Choctaw, and Creek.

It has taken more than 400 years for the pecan to become the important crop in the United States that it is today. One managed acre of pecan trees can produce up to 1000 pounds. The United States produces about eighty percent of the world's pecan crop with an average yearly production of around 200 million pounds. The majority of these pecans are grown in the "Pecan Belt" stretching across the southeast to the southwest throughout some twenty states. This makes pecans a multi-state crop.

The Praline is a family of confections made from nuts and sugar syrup. In Europe, the nuts are usually almonds or hazelnuts. In the South, pecans are almost always used.

Pralines originated in France. The actual creator of the praline is believed to be Clement Lassagne, the chef of Marshal du Plessis-Praslin (1598-1675). There are several accounts as to the actual creation of the candy. One version has Lassagne getting the idea from children who were scavenging for scraps in the kitchens, nibbling on almonds and caramel left over from one of his pastry creations. Another version has Lassagne getting the idea from a clumsy young apprentice who knocked over a container of almonds into a vat of cooking caramel. Perhaps the most interesting account paints du Plessis-Praslin as a notorious ladies man. Marshal du Plessis-Praslin asked his chef to come up with an irresistible treat he could present to the women he would court. It is said that he would put the sweet sugary nuts into little parcels marked with his name, which is why people began to call these sweets after him.

French settlers brought this sweet delight to Louisiana, where both sugar cane and pecan trees were plentiful. During the 19th century, New Orleans chefs substituted pecans for almonds, added cream to thicken the confection, and thus created the very famous sweet that is commonly associated with the "Big Easy". The basic praline recipe includes pecans, brown sugar, white sugar, cream and butter. Vanilla, rum, chocolate, coconut, and peanut butter may be added for variations in flavor. Each praline makers' praline is slightly different.

Praline can be pronounced different ways. In Louisiana we say "prah-leen" or "praw-leen". In the rest of the United States the common pronunciation is "pray-leen". However you say it pralines are a true Southern delicacy!!!