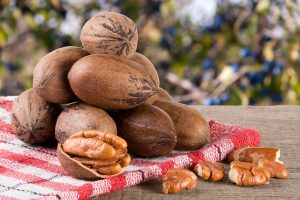 Along with the variations in pronunciation, there are a lot of things people don't know about the wondrous nut, the Pecan. First of all, pecans are in the nut family but the branch that requires them to be opened before eating, similar to walnuts. They also grow on trees in the Southern East and Central parts of the United States and Mexico. Those are the boring facts that you can find anywhere, we know there are more important, amazing things about pecans you are not aware of yet!

1. Health Benefits Of Pecans Because they are frequently associated with pies, some people are not privy to the nutritional value of the pecan. Pecans are a fantastic source of energy, especially for a quick, portable snack. They are high in "good fats" (monounsaturated) which are a healthy, lasting source of energy. Not to mention an abundance of vitamins and minerals that are naturally produced in the pecan, very high in vitamin-E and the B-complex vitamins. Along with other antioxidant, the pecans are great source for some of those hard to get minerals, such as iron, potassium and magnesium.

2. Pecans Are Delicious And Versatile Take a handful with you, make a pie or get a little adventurous with this versatile nut. Candied pecan products are a popular treat as you still get that nutritional value from sweets. Pecan butter is making a strong emergence in the nut butter movement, probably because it is fantastic. Roast them, toast them, roll them, add them to savory or sweet. The pecan can accompany any meal in so many ways and are easy to purchase in bulk.

3. There Are Many Varieties Of Pecan There are over 500 varieties of pecans reported in the United States alone. We have managed to farm the most popular ones such as the Moreland, Stuart, Desirable and Cape Fear but there are still many wild seedlings out there as well as other less popular ones. The shape and size of the shell and nut vary from type to type and that is how we determine which is which. As far as the use and taste of the pecan there isn't too much difference between the varieties.

Since you have never thought of that, neither will the person you are gifting the pecans too. We are not talking in a plastic bag or anything, although that wouldn't be a bad gift either. Get some one a nice tin with a variety of gourmet pecan treats. Again, this is a thoughtful, untouched gift idea that will still give them a sweet but nutritional surprise.