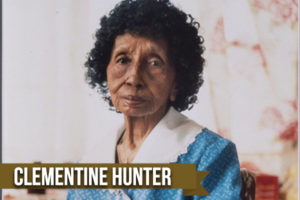 Clementine Hunter art doesn’t just inspire paintings, it’s also inspired musicals! Composer Robert Wilson created the opera “Zinnias: the Life of Clementine Hunter” in 2013, which is performed as a stage play focusing on her early years as a painter.

Clementine Hunter didn’t discover her talent early on, and only began painting when she reached her 50’s. Even though she didn’t begin painting until later on in her life, she is credited with creating over 5,000 paintings.

3. She gave away many of her early paintings – Clementine Hunter paintings for sale wasn’t always a thing, and as a matter of fact she often gave away her early works to people she knew. When she began selling her paintings, they would range from 25 cents to only a couple of dollars. Once she began getting famous for her work, and it was discovered that she stayed living on her small plantation cottage, she began charging guests one dollar for a photo with her. 4. She also created quilts –

Clementine Hunter might be most famous for her paintings, but she also created quilts for the Henry family.

5. She once had to sneak into her own exhibition – In 1955, Clementine Hunter’s paintings were shown in an exhibition at Northwestern State University of Louisiana. However, due to segregation laws, she wasn’t allowed in to see her own works. Rather than standing idly by, Clementine Hunter snuck into the university to see the exhibition for herself. 30 years later, she was awarded an honorary doctorate by the same university.
×