If you want a healthy product delivered to your doorstep that is of the highest quality, fresh pecans are a great choice. When deciding on purchasing fresh pecans online or running to the store for a bag, you should keep a few things in mind. 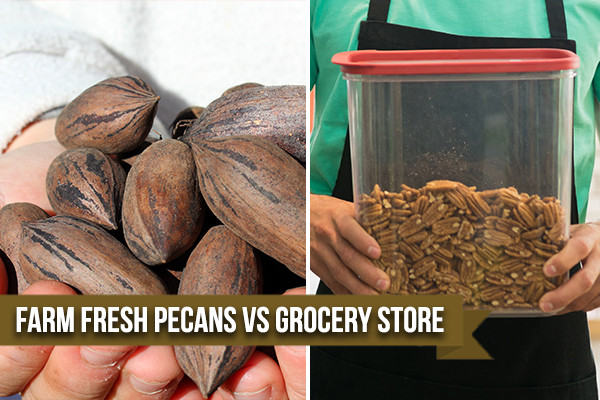 The freshness and taste of pecans have a lot to do with how they are grown and handled once they are harvested. When pecans are kept at room temperature, the oils begin oxidizing, which can darken the kernel. You see this often with store-bought pecans.

Fresh pecans, once shelled, should be kept in the freezer to retain maximum freshness and quality. You won't see this happening at a grocery store. When fresh pecans are kept at refrigerated temperatures, they remain almost as fresh as if they were just harvested from the trees.

The heart-healthy oils in fresh pecans in grocery stores oxidize quickly, causing the pecans to lose many health benefits. The pecans' quality, taste, and appearance also suffer as the pecan begins to go bad.

How Do You Know if Pecans Are Fresh?

If you have a rancid pecan, you will notice a bitter and unpleasant taste. So, if you notice an odor or taste or see mold developing on the pecans, they should be thrown out.

Fresh pecans will have a much sweeter taste compared to store-bought varieties. Some store-bought pecans also have a bad aftertaste which may deter you from grabbing a handful as a snack.

Fresh pecans will also have a different appearance than many store-bought varieties. Fresh pecans are naturally a golden amber color. The pecans in the store are often darker. Having fresh pecans delivered to your door is often the better option.

Finally, as previously mentioned, fresh pecans have a high level of oils that are naturally found in pecans. For this reason, a farm fresh pecan isn't going to always be shelf-stable. They need to be kept in a cool environment to retain their freshness, or they can go rancid.

The pecans you purchase from your local grocery store are often preserved with chemicals and contain other additives that keep the pecans from going bad.

Ultimately, if you want fresh pecans, you should order them from us online. You will quickly see and taste the differences between our pecans and those you typically purchase from the grocery store.