Pecan pralines are certainly one of our favorite candies using pecans. Their rich, decadent flavor makes it hard to eat just one. Pecan pralines are a Southern staple and a treat you must always enjoy when visiting New Orleans. However, have you ever wondered where these popular candies come from? Well they have a very interesting history.

The Origins Of The Praline 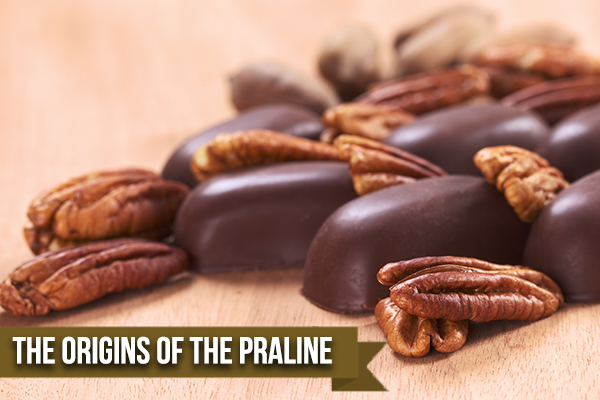 The original praline was invented in France in the 17th Century. The Praline is named after César duc de Choiseul, comte du Plessis-Praslin, a French diplomat. No one is really sure who the original inventor of the praline is, but many believe it was Plessis-Praslin’s personal chef Clement Lassagne. The first pralines were made with a combination of caramel and almonds. Plessis-Paslin would give these treats in bundles marked with his name to his prospective lovers. The pralines were so delicious, they soon became very popular in Europe. The recipe was brought to other countries that created different versions that include chocolate and nut pastes.

In 1727, the praline was introduced in New Orleans by French settlers. It was brought by Ursine nuns who helped young women prepare for marriage. As part of their training, the nuns taught these women to make pralines from scratch. However, almonds were very rare in New Orleans at the time. So they decided to use the locally-grown Louisiana pecans. As these women started making pecan pralines, the candy grew in popularity and spread across the region.

As pralines grew in popularity, women began selling them on the streets of New Orleans. Popular during the 19th Century, these women became known as the Pralinères. Pralinères were usually women that came from poverty or women of color. Selling pralines gave these women an opportunity to make money during a time when most people would not hire them. Pralinères sold to tourists and residents and helped pecan pralines become the official candy of New Orleans.

Pralines are not just a delicious treat, they have a really interesting history and helped a lot of women stay out of poverty. If you’d like to try a pecan praline for yourself, Natchitoches Pecans offers Louisiana pecans for sale. Our fresh pecans are ideal for making pralines. We also have delicious praline candies made with Louisiana pecans for sale. Give these regional pecan treats a try and let us know what you think. We’d love to hear from you.