Why is this a famous pecan pie? The name "famous" for this pecan pie is named such as this was a recipe from Lindy Boggs. Today is the two year anniversary of Lindy's death. In 1976 Mrs Boggs became the first woman to preside over a Democratic National Convention. Three years earlier, she had become the first woman from Louisiana elected to the House. Lindy succeeded her husband in the House of Representatives after he was killed in a plane crash. Lindy Boggs went on to serve nine terms on Capitol Hill, notably as a champion of women's rights. She died July 27, 2013 at the age of 97.

Take crusts from freezer while preparing other ingredients. When thawed prick edges and bottom. Brush with butter. Slightly beat eggs. Stir in sugar, butter, white syrup, pinch of salt. Beat. Add vanilla, cloves, nutmeg, cinnamon. Gently stir in pecans. Place in pie shells. Bake in 350°F oven for 40 to 50 minutes. (Second pie can be frozen if you need only one pie.) Yield: 12-16 servings 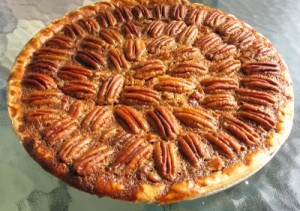