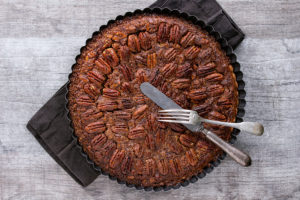 When you think of holiday desserts in the fall and winter, there are probably two pies that come to mind – pumpkin and pecan. Obviously, we are partial to pecan pie, and believe it’s the most delicious pie to enjoy this autumn. Where did pecan pie come from, and how did it get to be so popular during this time of year?

As you may know, pecans are native to North America, which is why it makes sense that the pecan pie was created here as well. There are some who believe that the pecan pie originated in New Orleans after it was settled by the French, although that doesn’t seem to be the most accepted accreditation. Early pecan recipes first appeared in Texas cookbooks in the 1870s and 1880s. The first recipe that resembled a pecan pie was published in St. Louis in 1898.

The pecan pie grew in popularity in the mid-1920s. It was around this time that bottles of Karo syrup were produced with a pecan pie recipe on the label. Pecan pie expert Edgar Rose told Eater, “That is why, to this day, most of the recipes for pecan pie still use Karo syrup.” People who bought the syrup quickly realized that the pie was delicious and easy to make. Karo’s recipe included a cup of the syrup, eggs, sugar, butter, vanilla extract, and pecans.

Variations Of The Pie

No matter where you go, you’re bound to find a restaurant that has put its own twist on the pecan pie. Sometimes its popular to add liquor to the mix, such as bourbon, rum, or whiskey. Other variations include adding shredded coconut and chocolate. The corn syrup can also be substituted for molasses or brown sugar. Earlier pie recipes may have used milk or raisins, but that was pretty much eliminated once the Karo recipe was circulated throughout the country. One well-accepted fact, however, is that a traditional pie crust is used in the pie.

As delicious as the pecan pie is, it’s important to remember that eating a pecan pie does not yield the same nutritional benefits as eating a handful of raw pecans does. Pecan pies are a dessert to be enjoyed in moderation every once in a while, while pecans are a healthy snack that can be enjoyed anytime, anywhere!