Louisiana can definitely be considered the birthplace of the ever booming pecan industry. The industry naturally began back in the 1700s and 1800s as more and more French settlers were in close proximity to the Native Americans. The pecan was already a staple in the Native American's diet, and the French soon adopted this same diet. New Orleans was one of the most popular international ports at the time and was the location for the buying and selling of pecans. This is also where people discovered that while the pecan was a very tasty commodity, it was also a profitable one. With this, the pecan industry began.

Pecan trees already naturally existed in Louisiana, but the settlers soon would establish more orchards and plantations so they can profit even more from the sale of their fresh Louisiana pecans. Some orchards only contained a few trees while others began booming by becoming the home to many pecan trees.

With fresh Louisiana pecans becoming a popular industry, the tradition has continued to today. In addition to being named the birthplace of the pecan, it is also widely known for the beginning of the pecan pie and the growing popularity of pecan pralines. With new innovations and advancements, Louisiana continues to be the place most known for pecans and honors its history.

While pecans in early history were picked and shelled by people, the hand shelling is now left to machines which allow for even greater production levels. Pecans are washed and dried once they are collected and after some tumbling through the machine, the meat of the nut is separated from the broken shells. The pecans get washed and dried again, and the smaller pieces are then separated from the halves. This is just one of many ways the pecan comes to be as we know it as consumers. With the help of the machines, pecan harvesters can get through thousands of pounds of pecans per day which also contributes to the very profitable and successful pecan industry in Louisiana. 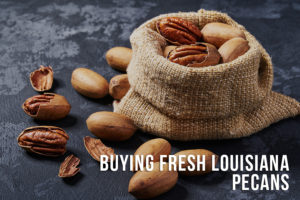