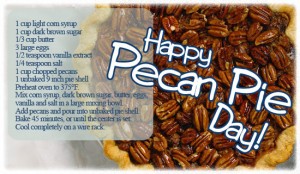 National Pecan Pie Day is annually celebrated on July 12. With that being said everyone needs to be sure they have shelled pecans on hand to make this delicious dessert. What is pecan pie? Wikipedia.org defines pecan pie as a pie made primarily with corn syrup and pecan nuts.Variations may include white or brown sugar, sugar syrup, molasses, maple syrup, or honey.It is popularly served at holiday meals and is also considered a specialty of Southern U.S. cuisine. Most pecan recipes for this pie include salt and vanilla as flavorings. Chocolate and bourbon whiskey are other popular additions to the recipe. Pecan pie is often served with whipped cream or vanilla ice cream. Pecan pie is actually French in origin.

The first American pecan pies were baked by French immigrants living in New Orleans. Many years later, the Karo company popularized this creation with recipes that called for the company's corn syrup as one of the ingredients. The recipe below is simple to prepare so try it and let us know how it turned out!