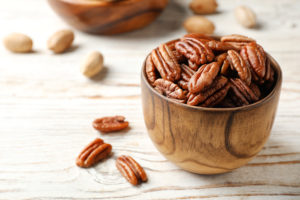 If you are looking to buy pecans this holiday season, you may want to do so sooner rather than later. Unfortunately, the pecan supply in the United States suffered dramatically because of a string of bad weather in the South. It will be interesting to see how the supply will impact customers’ abilities to buy pecans both now and in the future.

In the fall, a slew of hurricanes and storms ravaged southern portions of the United States, impacting pecan crops. One of the worst storms was Hurricane Michael, which made landfall in October. The storm destroyed more than 741,000 pecan trees. According to estimates, the storm destroyed half of the nuts that were ready for harvest. Farmers lost more than $100 million as a result of the storm. Unfortunately, farmers cannot replace pecan crops overnight. It takes seven years before a pecan tree can produce a single nut. The effects of Hurricane Michael will have a devastating impact on the pecan farmer community for years to come.

Cold Weather And Other Strange Patterns

There were also a few other strange events that also impacted the pecan industry. Texas, also known for its pecan growth, saw tremendous flooding, which ruined crops. Additionally, Louisiana recently suffered from a crippling stretch of below-average temperatures that impacted farmer’s pecan crops.

As a result of the bad weather, suppliers have been forced to look elsewhere to maintain their pecan supply. For instance, one Louisiana farmer said that his handlers were forced to purchase pecans from South Africa so that they could meet their yearly demands. Distributors have announced that they are doing their best to keep the prices of the pecans the same so that everyone can enjoy them this winter.