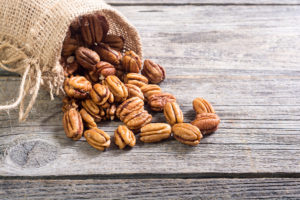 Very few people know that the history of pecans is tied closely to the history of the founding of our country. Pecans are native to the United States and were found nowhere else in the world. They became an important food source for settlers and our founding fathers. Here is the story of how this unassuming nut helped shape our American history.

Pecans During The Revolutionary War

The first pecan orchard was established by Robert Prince in 1737 in Flushing, New York called Linnaean Botanic Garden and Nurseries. Initially, Prince grew a variety of fruits but eventually started growing a hardy pecan tree variety known as Carya illinoinensis. During the Revolutionary War, the trees in this nursery were so important that General George Washington sent armed troops to protect the nursery from destruction. Through the entirety of the Revolutionary War, Washington was known to always keep a pocket full of pecans. With the food chain uninterrupted and the power packed protein of pecans fueling the good General, history was made in the founding of our country.

After the Revolutionary War, Washington while on a river barge tour as the first President honored Prince’s orchard in 1789 with a visit. Washington’s love of pecans only continued to grow. When Thomas Jefferson became the third President of the United States, he knew Washington’s fondness of the pecan. So when Lewis and Clark sent samples back of the “Carya illinoinensis” to Jefferson for his orchard in Monticello, he gifted Washington pecan trees to grow at his home in Mount Vernon Garden. Sadly, they both had trouble getting their trees to bear fruit, so both Presidents had to source them from the West whenever they could. You can still visit these beautiful trees planted by our founders to this day. Both Presidents would be pleased to see how their favorite nut has grown in popularity. Nowadays you can get pecans anywhere in the country. It’s incredible how something so simple as a pecan could be so important to our country’s founding. At Natchitoches Pecans we honor the history of the pecan by growing the finest quality Louisiana pecans. Find out what our founding fathers knew and enjoy this truly American delicacy.